Memorial Day is a day for honoring all the soldiers who have died in service to their country.

The origins of the Memorial Day observance date back to the Civil War (1861-1865). Originally called Decoration Day, a claim was made in 1906 that the first Civil War soldier’s grave that was decorated was in Warrenton, Virginia, on June 3, 1861. There is documentation that women in Savannah, Georgia, decorated Confederate soldiers’ graves in 1862. In 1863, the cemetery dedication at Gettysburg, Pennsylvania, was a ceremony of commemoration at the graves of dead soldiers. Local historians in Boalsburg, Pennsylvania, claim that ladies had decorated soldiers’ graves on July 4, 1864. As a result, Boalsburg promotes itself as the birthplace of Memorial Day.

More than two dozen locations claim to be the site of the first Memorial Day observance. The majority of these sites are in the South, where most of the casualties of the Civil War are buried. For example, both Macon and Columbus, Georgia, as well as Richmond, Virginia, each claim to have begun Memorial Day in 1866; and Boalsburg, Pennsylvania, claims that it held the first observance in 1864. However, one of the first documented sites to have held a tribute to the Civil War dead took place in Columbus, Mississippi on April 25, 1866. A group of women placing flowers on the graves of Confederate soldiers (casualties of the battle at Shiloh) noticed the destitute graves of the Union soldiers and also decorated their graves with flowers. The first community-wide observance occurred in Waterloo, New York, on May 5, 1866, with a ceremony to honor local Civil War veterans. (A century later in 1966, President Johnson and Congress declared Waterloo to be the “birthplace” of Memorial Day because of that earlier observance.)

Following President Lincoln’s assassination in April 1865, there were a variety of commemoration events. The sheer number of soldiers of both sides who died in the Civil War, approximately 620,000 soldiers died out of 3,211,000 soldiers that fought in the Civil War, meant that burial and memorialization took on new cultural significance. Under the leadership of women during the war, an increasingly formal practice of decorating graves had taken shape. In 1865, the federal government began creating national military cemeteries for the Union war dead.

The first widely-publicized Memorial Day-type observance after the Civil War was on May 1, 1865, in Charleston, South Carolina. During the war, Union soldiers that were prisoners of war had been held at the Hampton Park Race Course in Charleston. More than 257 Union prisoners died there, and were hastily buried in unmarked graves. Together with teachers and missionaries, black residents of Charleston organized a May Day ceremony in 1865. The freedmen cleaned up and landscaped the burial ground, building an enclosure and an arch labeled “Martyrs of the Race Course.” Nearly 10,000 people, mostly freedmen including about 3,000 school children, newly enrolled in freedmen’s schools, as well as mutual aid societies, Union troops, black ministers and white northern missionaries, gathered on May 1 to commemorate the war dead. Most brought flowers to lay on the burial field. On May 5, 1868, Major General John A. Logan, commander-in-chief of the Grand Army of the Republic (the veterans organization for Union Veterans), set aside May 30th as Decoration Day to commemorate fallen soldiers by adorning their graves with flowers. General Logan’s order declared: “We should guard their graves with sacred vigilance….Let pleasant paths invite the coming and going of reverent visitors and fond mourners. Let no neglect, no ravages of time, testify to the present or to the coming generations that we have forgotten as a people the cost of a free and undivided republic . . . The 30th of May, 1868, is designated for the purpose of strewing with flowers, or otherwise decorating the graves of comrades who died in defense of their country during the late rebellion, and whose bodies now lie in almost every city, village and hamlet churchyard in the land,” he proclaimed. The date was chosen because it was not the anniversary of any particular battle.

That year, 5,000 gathered at Arlington National Cemetery to attend commemoration ceremonies presided over by General and Mrs. Ulysses S. Grant. This was the nation’s first major tribute to those who fell in the Civil War, and at that time small American flags were placed on each grave (a tradition that continues today).

Memorial events were held in 183 cemeteries in 27 states in 1868, and 336 in 1869. The northern states quickly adopted the holiday. Michigan made “Decoration Day” an official state holiday in 1871 and by 1890, every northern state had followed suit. The ceremonies were sponsored by various womens organizations. By 1870, the remains of nearly 300,000 Union dead had been reinterred in 73 national cemeteries, located near major battlefields and thus mainly in the South. The most famous are Gettysburg National Cemetery in Pennsylvania and Arlington National Cemetery, near Washington, D.C.

There is evidence that General Logan had adopted and adapted the annual Confederate Memorial Day custom, for the North, that had been in practice in the South since 1866. The U.S. National Park Service attributes the beginning to the ladies of Columbus, Georgia.

The preferred name of “Memorial Day” for the holiday gradually changed from “Decoration Day,” and was first used in 1882. It did not become used widely until after World War II, and was not declared the official name by Federal law until 1967.

After World War I (1917-1918 for the United States), Memorial Day was expanded to include all American military men and women who had died in any war.

On May 26, 1966, President Johnson signed a presidential proclamation naming Waterloo, New York, as the birthplace of Memorial Day. Earlier, the 89th Congress had adopted House Concurrent Resolution 587, which officially recognized that the patriotic tradition of observing Memorial Day began one hundred years prior in Waterloo, New York.

On June 28, 1968, the Congress passed the Uniform Monday Holiday Act, which moved four holidays, including Memorial Day, from their traditional dates to a specified Monday in order to create a convenient three-day weekend for federal employees. The change moved Memorial Day from its traditional May 30 date to the last Monday in May. The law took effect at the federal level in 1971.

Was a three-day weekend for federal employees the real reason behind the Uniform Monday Holiday Act, since it didn’t include all federal holidays? A review of the Uniform Monday Holiday Act debate of 1968 in the Congressional Record clearly shows that supporters of the bill were intent on moving federal holidays to Mondays to promote business. Nothing is more important than corporate America’s bottom line.

Beginning in 1987, Hawaii’s Senator Inouye, a World War II veteran, introduced a measure to return Memorial Day to its traditional date. Inouye continued introducing the resolution until his death in 2012.

The National Moment of Remembrance, which occurs at 3 p.m., local time, on Memorial Day, asks Americans to pause in an act of national unity for a duration of one minute. The 3 p.m. time was chosen because it’s the time when most Americans are enjoying their freedoms on Memorial Day. The Moment of Remembrance does not replace traditional Memorial Day events. It’s another way to honor those who died in service to the United States.

The idea for a Moment of Remembrance occurred when children were touring the Capital. When asked what Memorial Day meant, the children responded, “That’s the day the pool opens.” A Gallup Poll at the time revealed that only 28% of Americans knew the true meaning of Memorial Day.

The White House Commission on Remembrance was established by Congress (Public Law 106-579) on December 28, 2000, because it is essential to remember and renew the legacy of Memorial Day, and to promote the values of Memorial Day by acts of remembrance throughout the year.

As specified in PL 106-579, the National Moment of Remembrance is to be practiced by all Americans throughout the nation at 3pm local time. At the same time, a number of organizations throughout the country also observe the Moment: all Major League Baseball games halt, Amtrak train whistles sound across the country, and hundreds of other nationwide participants remind Americans to pause for the Memorial Day National Moment of Remembrance.

On Memorial Day, the American flag is raised briskly to the top of the staff and then solemnly lowered to the half-staff position, where it remains only until noon. It is then raised to full-staff for the remainder of the day.

The half-staff position remembers the more than one million men and women who gave their lives in service of their country. At noon, their memory is raised by the living, who resolve not to let their sacrifice be in vain, but to rise up in their stead and continue the fight for liberty and justice for all.

THE REMARKABLE LEGACY OF MEMORIAL DAY — 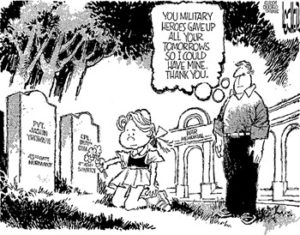 In 1905, a Memorial Day sermon was given, and its message is just as relevant today as it was more than 100 years ago. Excerpts from the sermon are as follows:

“Today in this memorial service, we remember our beloved died for their part in the solution of the great problems of humanity. Not only did they freely offer themselves upon their country’s altar – a sacrifice for the great interests of the present – but by their blood they became the oracle and prophet of the future. They denounced and defeated the severance of national bonds, pronounced the doom of rebellion, freed the bondsman from his chains . . . Every generation should store up blessings for the next. We bless the past for its lesson of experience, and we revere the memories of the men who made the past a glorious prediction for the future. So we come on this Memorial Day to record our indebtedness to the patriotic soldiers, pay our homage for their bravery, express our sympathy with their sufferings, and our admiration for their achievements, pledging ourselves to stand loyally by the institutions for which they nobly died . . . We are here today, a grateful multitude, to pay such a tribute as we can to the heroes who did so much for us. We strew flowers of beauty upon their grassy mounds and speak words of love and kindly remembrance; we shed tears of sorrow for the departed and express words of sympathy for the bereaved as though but yesterday they had passed out of our sight . . . It has been said that the particular genius of this memorial season is that while other holidays praise institutions, this glorifies men, honors the private citizens and the seemingly obscure soldier. Walter Scott described Old Mortality as going through the cemeteries of Scotland, chiseling anew upon the tombstones the names that time had well nigh obliterated [from Sir Walter Scott’s “Old Morality,” in Tales of My Landlord (Edinburgh: 1816), Vols. II-IV]. Asked to explain his zeal for the memory of these worthies, the old man replied that he wished to see the heroes of yesterday march forward side by side with the youth of today. That nation suffers a great calamity whose children and youth have separated themselves from yesterday’s battlefields and victories and have forgotten to honor the memories of their fathers – the sages and statesmen from whom they have received a priceless heritage.”